September is National Suicide Prevention Month, and Suicide Prevention Week is September 6-12. Suicide is the tenth leading cause of death overall in the United States, and the second leading cause of death among youth and young adults.1 Suicide is also a growing problem, up from 29,366 reported fatal suicides in 1999 (10.5 per 100,000 people) to 48,631 in 2018 (14.9 per 100,000).2 Within the Central East region, there were 4,469 fatal suicides in 2018 (14.5 per 100,000). Suicide is most prevalent among White and American Indian/Alaska Native populations, older adults, and men. However, rates of suicide have been increasing across all demographics, often at a faster rate among populations that historically have not had as high rates of suicide. For instance, from 2010 to 2018, the rate of suicide among African Americans increased by 38 percent and among Hispanic individuals by 36 percent. These increases have primarily been driven by higher rates of suicide among youth and young adults. Recent surveys have also found that rates of suicidal ideation have significantly increased since the COVID-19 pandemic began, with the largest increases being among youth ages 18-24, Hispanic and African American respondents, essential workers, and self-reported caregivers for adults.3

Suicide is one of the primary forms of a “death of despair” and preventing suicide requires attention from across the public health field and the entire behavioral health continuum, from mental health promotion to substance use prevention. Substance use can significantly increase the risk of suicide4 and can also be the method of death, via overdose. Alcohol intoxication has been found in 22 percent of suicide deaths and opioids in 20 percent, with even higher rates of use found among people who attempted suicide. In fact, suicide is the leading cause of death among people who misuse substances, and the lifetime risk of fatal suicide among people with a substance use disorder is seven percent.5 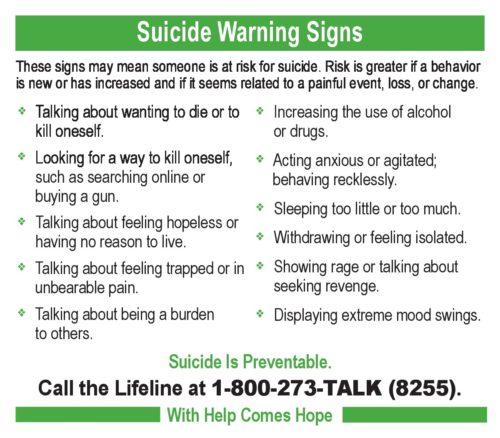