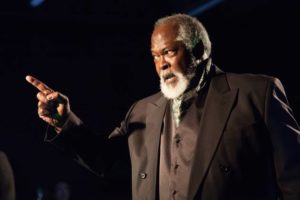 In this living history presentation Bill Grimmette, storyteller, actor, motivational speaker, living history interpreter and Maryland Humanities Council’s 2017 Chautauqua Scholar-Actor will take the audience on a journey through the life of Talbot County’s native son. (Register below to attend this moving tribute.)
In 1818, the year Frederick Douglass was born, the constitution was a mere 29 years old. Born into a nation of slavery, Douglass owned nothing, not even his person nor name. He would spend the next 20 years in the thralls of slavery enduring every  imaginable disgrace of human bondage. Yet, Frederick Douglass, whose name was Frederick Augustus Washington Bailey in slavery, forged a river of opportunities by which to liberate his body to join his always liberated mind. Upon escape from Baltimore, he fled to Massachusetts, changed his name, married his first every girlfriend, took a caulker’s job and began to tell his story. In 1860, while avoiding capture by Colonel Robert E. Lee’s forces who had just hanged John Brown, Douglass engaged a debate in Scotland on the Constitution as a Freedom not a Slave document.
Bill Grimmette is an actor and storyteller with nearly 50 years on the stage. His most recent performance was as King Lear in modern dress at the Atlas Performing Arts Center in DC and as WEB DuBois for the Maryland Chautauqua in July 2017. Bill has performed Frederick Douglass for the Chautauqua  presentations in Maryland and Colorado and other venues for the past 20 years. This year, for the Bicentennial celebration of Frederick Douglass’ birth, Grimmette is preparing a national tour to revitalize the Argument for the constitution. This is his first stop.
Please click here to register.    Cost for members – $12           Non-members – $15